I can’t help but laugh when I look at this photo…. 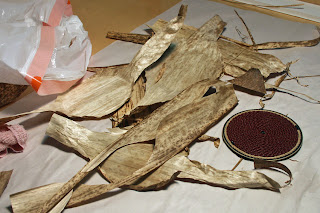 This is what’s left of the three bamboo sheaths
that I purchased to re-cover my baren.
Obviously, I should have gotten quite a few more.
I’m strictly right-handed, so trying to hold, and
twist and fold this with both hands was
a major challenge. Since I was moving so slowly,
the sheath was drying out and all
three ended up splitting along the edge
rendering them useless. Even re-dampening them
as I went along wasn’t working very well.
So back to square one…now, where is my McClain’s catalog???
2 Comments

What great printmaking friends I have….

My colleagues from Tiger Lily Press, who recently returned
from the Southern Graphics Conference,
were kind enough
to bring me back a surprise gift of a new baren! 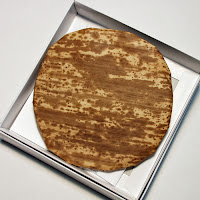 (However, this doesn’t mean I’m off the hook for repairing my old one!)

This is one of those projects that I’ve been dreading ever since
I purchased my first baren…..
re-covering the baren with a new barengawa (bamboo sheath).


So my order from McClain’s arrived yesterday which included three
bamboo sheaths.
It was probably overkill to purchase three, but I thought it safe just
in case I screwed up!


Luckily, David Bull’s ebook “Your First Print” has
a wonderful section on how to re-cover a baren, so I plan on studying
that a lot before I make the attempt. 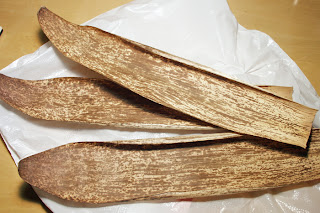 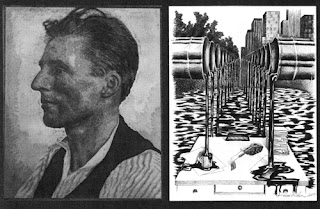 “Art From the Press”
selected works by local printmakers.

On Saturday, April 2ndthe gallery will host a poetry & printmaking event!*Complimentary lunch: 12 PM*Poetry reading:12:15 PM – 1:30 PM*Printmaking demonstrations: 1:30 PM – 3 PM
Also on display will be
original drawings and poetry
from the book:
“For a Better World, 2007”

Prior to discovering shina plywood, I never cared  much to make woodcuts.
Too much work, coarse edges, chipping wood, hard on the tools. But shina
has been great to work on, especially with a Dremel.
Unfortunately,  McClain’s is temporarily out of every size block that I ordered. Since their
next shipment isn’t expected until late April, it’s time to find an alternative.
I picked up a small birch plywood block at my local craft store, unsure of how this would
work with a water based technique.
One half was coated with sanding sealer, and the other left bare. Similar marks
were made with the Dremel (tough on the bits!) on each section. I expected the
ink to bead up on the sealed side (it didn’t), and the grain to be raised
on the unsealed side (it did). But, it turns out that the only
discernible difference is the unsealed side prints slightly darker.
So while I patiently wait for my shina order, birch plywood may

be a decent alternative to making woodcuts. 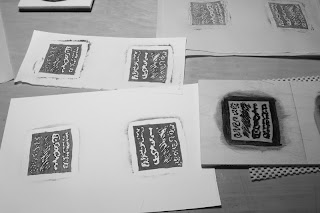 I had one smallish scrap woodblock
left in my stash,
and was able to squeeze out
a 6″ X 8″ print off of it.
The nice thing about working on a small scale?
Getting it done quickly! 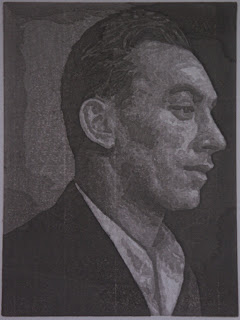 Untitled mokuhanga woodcut
12 reductions
edition of 5
I used a paper that I’ve only tried once before,
the fairly lightweight Masa Dosa.
I was surprised that it held up so well
with 12 reductions.
But would I use it again? Probably not.
Early in the reduction process, it was
printing with a blotchy appearance, but that eventually
diminished as more layers of ink were added. 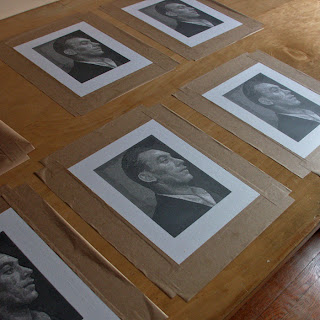 Traditionally, completed mokuhanga prints
are dried between sheets of newsprint and/or blotters,
placed between boards and topped with
a light weight until dry.
This method is supposed to flatten
the print, but I’ve never had much success with it.
Instead, I use watercolor tape to
adhere the damp prints to a board
until dry. This completely flattens
the prints, even removing any unsightly
baren marks.
Obviously, this isn’t practical for
a large edition, but works well if you have
only a few prints to dry.
Leave a comment
« Older Entries