For the last X number of years,
I’ve been using Torinoko paper exclusively for
my mokuhanga prints.
Despite the finicky nature of it, I kept
right on using it because I had simply gotten used to it.
That, plus it’s reasonably inexpensive.

For the two prints I’m currently working on, I’ve
decided to dump the Torinoko for a while,
and expand my Washi horizons.

Last weekend, the three blocks
for the first print (of two) were finally ready
to be proofed all together. I hastily mixed up three
values of grey ink and proceeded to proof on Shin Torinoko,
which is a really crappy thin version of Torinoko.
Not good, period.
No photos of THAT will be posted here!

I’m also using my Hon baren for the first time. Lovely as it is,
it has a very different “feel” than the baren that I’ve
grown accustomed to and will require
more practice.

Today, I sacrificed a few sheets
of better quality paper to proof with, Nishinouchi and
Tosa Maruishi.
Both printed nicely. However Nishinouchi is
much too thin to use for this large size image. Once dampened,
it’s very difficult to handle, so that one is out.
I’ll try a few more before I settle on one for the edition, I’ll also
be experimenting with special techniques and possibly
color on these blocks before
I get the edition started.

Nishinouchi is on top and Tosa Maruishi below.

This is a proof variation using bokashi (gradation printing)
around the outer edge of the block.

This is one mokuhanga chore that I prefer to
put off as long as possible…conditioning printing brushes.
New brushes, such as these two, need a little work before using.

The bristles (either horse or hog hair)
need to be singed and the tips split.

What’s the point you ask?
Singeing and splitting the bristle tips results in a
softer, more absorbent brush. Plus, it’s less
likely to leave unsightly streaks on the block from rice paste
during printing.

I skip the singeing step altogether and head right to the
“dragon skin”, which is a perforated metal plate
nailed to a wood board. Traditionally, in Japan,
a shark skin (yes, a real shark skin) is stretched
and nailed onto a board.

After soaking the brushes  in water for a bit, they’re scrubbed
vigorously over the surface of the dragon skin to split the tips.
This takes quite a bit of time, as long as 30 minutes,
of scrubbing……hard!

As you can see in the above photo, the water
turns black, and stinky too.
The odor is akin to being inside a barn…
full of wet barnyard animals…on a hot summer day.

Sadly, this is not a one time chore,
but needs to be done periodically to keep the brushes
in tip-top shape.

Comments Off on Hairsplitting adventures 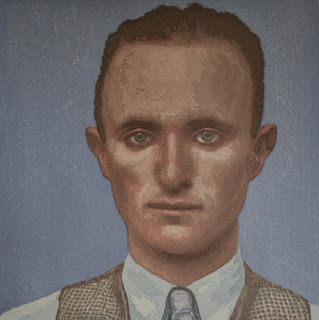 Untitled
14″ X 14″ moku hanga reduction woodcut
edition: 5
Last week, after working on this image
for two months, I decided it was
time to bring it to an end.
This was my first color woodcut,
and the first time for me to
use more than one block (both
sides of two blocks were used). I was
surprised at how much wood that was left
on the blocks, it was possible
for me to keep right on printing but
enough was enough!
Generally I like to keep careful records
of ink mixtures, number of times
I print, etc.
Somewhere along the way, I lost
track of doing that. I think
that at least 12 different colors were
used, or countless variations of those. The background
was printed at least 8 times, and
overall the entire image
was overprinted roughly
35-40 times.
The paper (Torinoko)
held up very well despite
eventually showing some signs
of wear.
I guess I’ll continue pursuing color
printing since I just invested
in a wider selection of color inks!
Comments Off on Done

continuing on with color……

Since my last post on this color woodblock,
I’ve been steadily overprinting
with pale washes of color to warm up
the flesh tones. Although my
selections of reds are limited and
the ones I’m using aren’t exactly the
correct shades, but I’m
making do with what I have on hand. 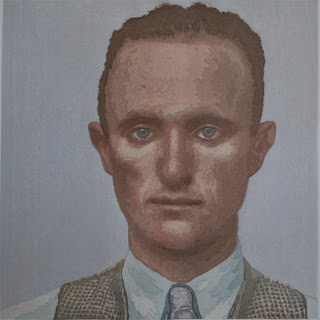 One thing I really like about using multiple
blocks is the ability to print
numerous colors one right after the other.
What a time saver!
This weekend I’ve printed four times already.
The last was using this block to start
building up some of the shadows in the face. 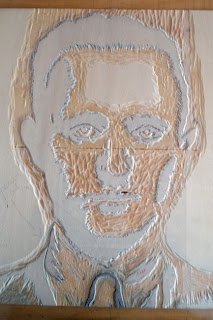 I used the same pale blue-gray as the background.
At this point it doesn’t register as blue,
but I’ll plan on cautiously overprinting
the same area until it
gets to where I want it.
The background, shirt, tie & vest
are “on hold” for now until the face is done.
Then I’ll have a better idea
what direction those areas
will go in.
Leave a comment

I’ve ventured into scary territory….color woodblock printing!
My last attempt at any sort of color printmaking
was at least 30 years ago. Back then I
tried color lithography & etching,
everything I did was a dismal dud.
So it was B&W only from that point onward.
But this year I wanted to try explore new areas
of printmaking. Not only is this my first
color woodblock print, but also the first multi block one.
It started with a master sketch and
separate color break downs. It wasn’t long
before I threw all of that aside, too tedious
and time consuming, and decided to
just “wing it” and see what happened.
I have two 14″ X 14″ blocks and
am using both sides of each. The reduction
process is pretty comfortable for me
so I’m using that technique as much
as possible.
After trying some dry pigments (not
successful for me), I settled on using gouache.
So far, I think I’ve printed 18 times.
I’m being very safe and either watering down,
or muting every color I use.
Consequently my image looks flat at the moment.
Luckily I have plenty of
wood left so I intend on continuing
to overprint to beef up the image.
Plus, I’ve made some ridiculous carving blunders,
and I hope to correct those as well. 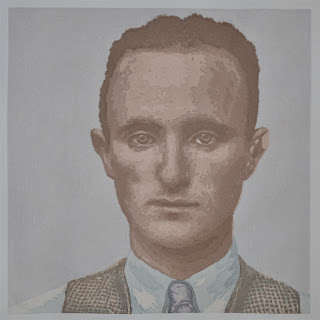 A Week for Experimenting.

My “day for experimenting” has turned
into a week + of experimenting with
moku hanga & chine colle.
I had some very unexpected, but pleasant,
surprises as I worked through the process.
Since I’m using a water based glue (methylcellulose),
I had assumed that the chine colle
paper would have to be applied during
the last run of printing due to the possibility
of it coming loose from the print paper.
I was very wrong with that assumption.
Long story short, after applying
the chine colle paper (Sekishu) early in the process,
I allowed the prints to dry and then re-wet
them at least 7 more times (without any overprinting).
I had fully expected the glue to reactivate
with the dampened paper and then fall off, but it didn’t.
Encouraged by this, I continued
printing over the top at least 7 more times
using the reduction method. 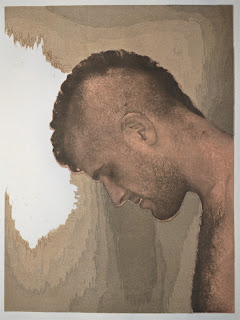 Since I was just playing around with this, I wasn’t
too concerned with registration. I used both sides of the
block here. You can see an unsightly edge around the profile due
to my inaccurate carving. That’s something
I’ll need to work on, but I feel confident
enough to begin work on a “real”
print using what I’ve learned so far.
1 Comment
« Older Entries